President Donald Trump declared a national emergency on Friday to secure the necessary funding for his infamous wall on the southern border. Following the government shutdown last month, Congress did not agree to fully fund the border wall which is estimated to cost $5 billion. Declaring a national emergency is the president’s next step to gaining the money needed for the wall he promised his supporters. By doing so, he could potentially take around $6 billion from other government accounts to pay for it. House Democrats are attempting to challenge President Trump’s decision on the grounds that it is unconstitutional.

Northwestern students had a united opinion on this issue, with all 30 students polled agreeing that the national emergency was unjustified. 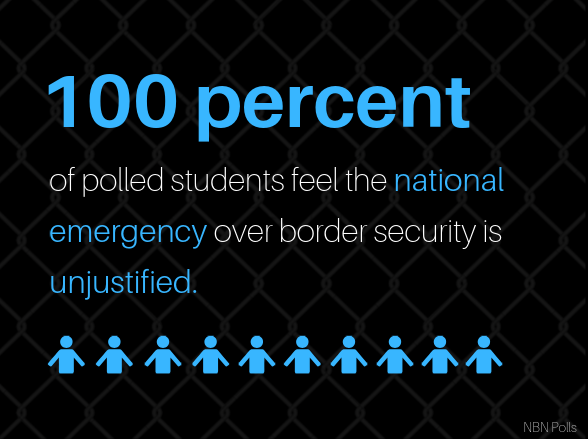 Communications junior Dylan Kennedy felt that issuing the emergency could have disastrous effects for the future of American government.

“It sets a terrible precedent for huge executive action in the future without Congress having to authorize funding,” Kennedy said. “This is a bad way to run a country and will concentrate more and more power in the hands of a single person. It’s dangerous for a democracy.”

Many students agreed that the emergency and internal government conflict surrounding it was just a waste of time.

“Directing federal funding to a fantasy wall and resources to a non-emergency is a waste,” Bienen sophomore Chris Juhn said. “The legal proceedings and opposition from Congress is gonna take valuable time away from actual important issues. It’s so stupid.”